And before you roll your eyes and try to remind me that I promised to be done with the victim mindset this year, hear me out.

Every goal I've set goes one of two ways....

Real-life examples of this from recent years...

Becoming a full-time cello teacher - Yes, I attained that, but only after finding out that my specialty of teaching is not what I originally intended it to be and then to have that career get cut short - Thanks genetics!

Planning a huge cross-country tour of house concerts - Turns out there aren't that many people (that I've talked with) that want to plan to throw a party with a few friends and host live music in their living room. Nor do venues want to book an artist they've never heard of (I don't blame them.)

Dating - I've met about a bajillion dudes, most have been emotionally unavailable, weird, hangry, unemployed, alcoholic, overbearing... the list goes on... & the thought of "settling" for someone as important as a life-partner makes my blood curdle. But I digress...

Okay, take my 2014 Artist Residency... I applied for it, pre-diagnosis of my Essential Tremor, thinking I'd come home from 6 weeks in the mountains with a simple album of cello compositions. Nope. Even better. Post-diagnosis, I came home with an entirely new instrument and a new career.

Now zoom forward to most recent, recording my first studio full-length - I incorrectly assumed it'd take "max, a couple months." Well, here I am just under a YEAR later, seemingly back at square one.

So I'm making yet another proclamation...

We (or rather, I) try to make things happen with sheer will-power or force.

but more often than not, that strategy is about as effective as trying to push the river. & I don't know if you know this, but... 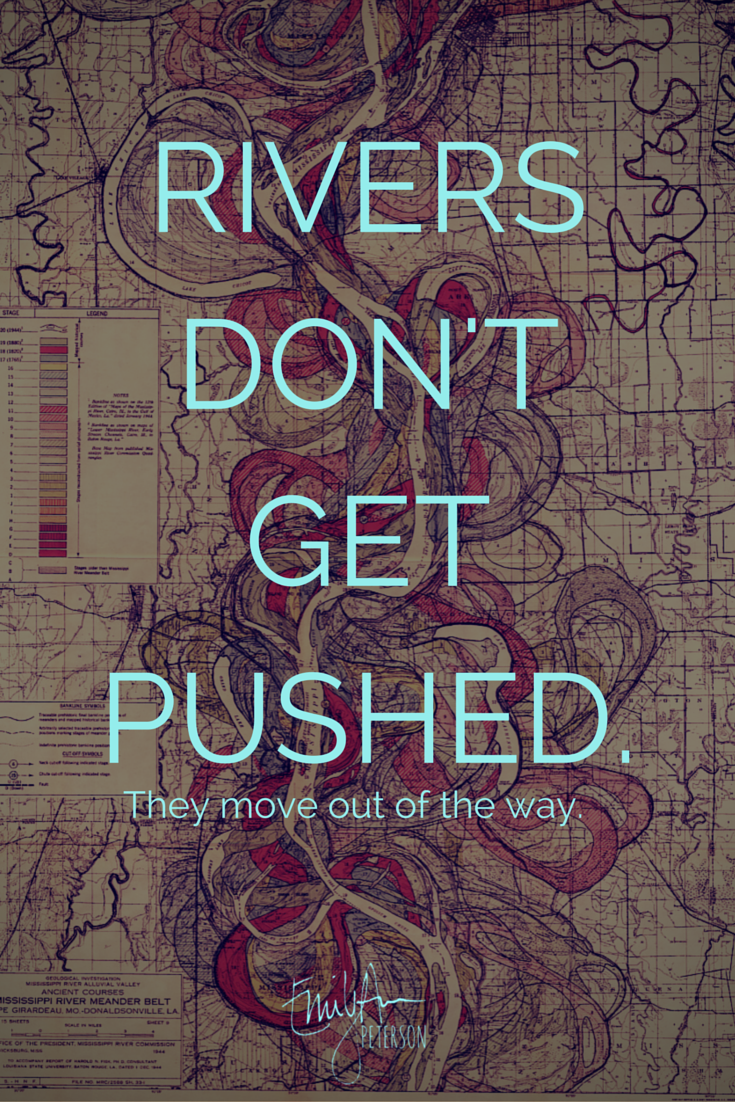 They move out of the way.

You can't push rivers. It's impossible. You either hold them back completely or they go around you with no thought to how hard you're pushing.

[Note: One of my marketing clients, whom I deeply respect, turned me on to the concept of 'pushing the river.' I can't take credit for it.]

Leo Babauta has some great thoughts on all this. His minimalist philosophy advocates for ruthless elimination of goals. He explains, probably much more eloquently than myself, why goals only hold us back.

Goals themselves don't actually attain anything. Goals limit our expectations. They make us feel bad. They keep us from living in the present, by aiming for the future based on our past.

This is gonna be a hard one for me to quit. I've been such a planner and strategizer for my entire life. In fact, I consider those to be my strongest qualities, so I definitely have more to add to this subject, which I'll save for another time, but for now...

In any one single direction at a time.

Because I have a feeling that if we just keep enjoying moving forward, connecting with others along the way, and exploring life together, we all might end up in places we'd never dreamed for ourselves.