The Silence Kills Me.

On Being a Solo Artist With Internal Feedback Loops...

Have you ever wanted to just shake someone to get answer out of them?

In the recording process, there's a moment when the song finishes...

It feels like the moment right after you jump off a cliff - no gravity, pit-in-stomach, an "Am-I-gonna-die?" feeling.

It lasts half a second.

I find my breath again.

and then look up.

I'm usually asking about the tangible product. "Was that total crap? or a keeper? Should I do the same thing again? But way better this time? Should I do something totally different? How should I adjust? fix? improve?"

[Fortunately, I'm able to take my own advice (see TEDxtalk) and not to ask questions regarding self-worth in this moment. At least within reason... ;) ]

When working for-hire as a recording cellist I get a decent stream of feedback after that cliff-jumping moment. I get to translate facial expressions to get a read on the artist's approval of my freshly-minted string arrangement.

Though this kind of feedback can be harsh, I've learned to use it as a comfort during the recording process. Good or bad, it's the feedback that "catches" me after that jump-off-a-cliff moment.

So want to know the thing that kills me about working as a solo artist?

It's there. Don't get me wrong. Oh, the feedback loop is definitely there. But not out there. Working as a solo artist, I can no longer look out to infer, translate, gauge, and act on a judgement.

I realize that may sound like a statement that falls under the "Duh" category. But damn, it's a tough one to swallow in practice.

Common producer/engineer practice is to say the least amount as possible after a take.

The super pros that I've been working with do NOT help. Engineers, producers and the like, all know the best way to work with their musicians & artists is to not over-compliment or give too much feedback.

I know this. Even as a for-hire cellist I knew this. I saw it happen all. the. time. Those dudes can be as silent as the grave. & I've seen the silence make an artist really work for high quality.

*wipes off sweat from forehead*

So, now I'm left sitting on the piano bench, behind a microphone absolutely racing through all of those post-cliff-jumping questions on my own. The usual feedback loop is no longer calm and easy to translate like before. It now reads like...

EMILY!!! MAKE A DECISION!!! WAS THAT TOTAL CRAP? OR A KEEPER? SHOULD YOU DO THE SAME THING AGAIN? ONLY WAY BETTER THIS TIME? WHAT IF YOU DID SOMETHING TOTALLY DIFFERENT? SHOULD YOU ADJUST? CHANGE DYNAMICS? CHORDS? LYRICS? FIX IT? AHHHHHHHHHHHHHHHHHHHHHHH!!!!!!!!

(Someone is waiting on me & I deeply value their time.)

(This is no longer someone else's musical career in question. It's my own. and in most cases we're talking permanent.)

Since 'working solo' is still new to me and because it still requires an adjustment in my recording process...

I'll hear myself asking, "What did you think?"

After an entirely way too long silence, inevitably he'll ask (as he should) "Hmm... What do you think?"

But answering that question feels like being truly alive. 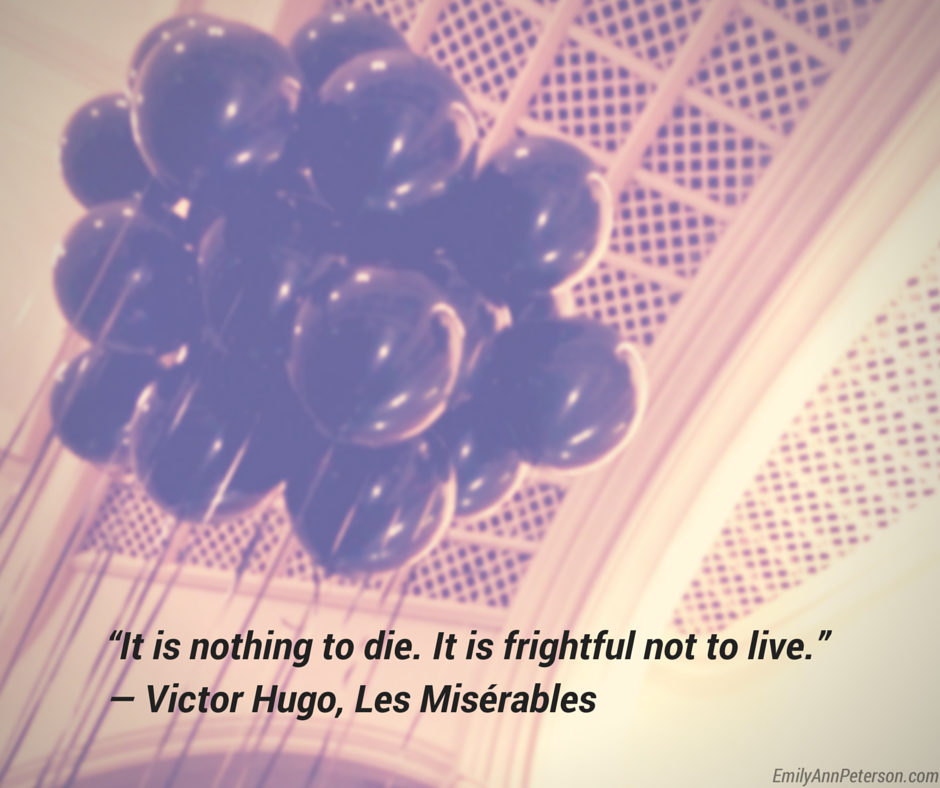